Life for some, is a quest for things tangible, but elusive. There are those who strive to transform their fantasies into dreams and their dreams into reality. In Mike Soldano’s case, life is a quest for the ultimate guitar tone, a sound so profound, so “right,” so completely musical, that when scientists, historians, an musicologists get around to titling all things “Rock ‘n’ Roll” and placing them in the Smithsonian, the Soldano guitar sound will occupy its own wing. This man, Michael J. Soldano and his Quest for Tone, make for a great story, the story of a life-long journey that is the direct extension of his love of the classic guitar sound. 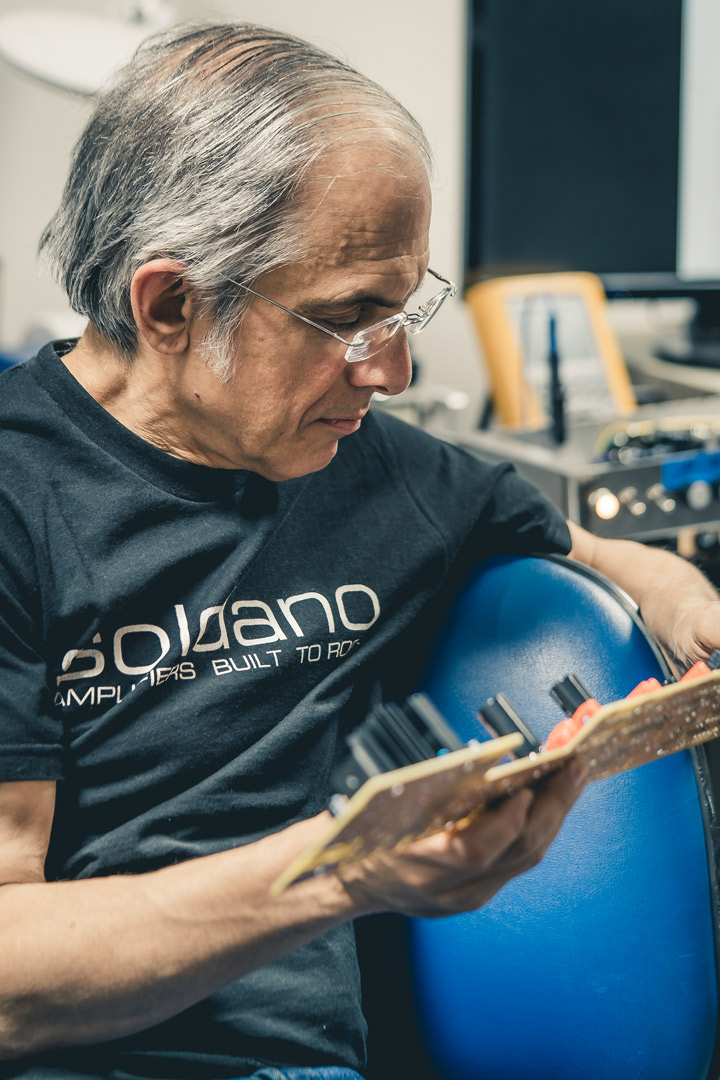 Eric Clapton, Mark Knopfler, Dickey Betts, Lou Reed, and Matthias Jabs, to name a few, mythologize Mike’s guitar amplifiers. Stevie Ray Vaughan asked Mike to build him an SLO-100 (Find the story from Guitar World here). Ask anyone of them – or any other guitarist fortunate enough to play a Soldano amp – and they will tell you the same thing: A Soldano guitar amplifier is in and of itself, a musical instrument – and much more. Actually, what they will tell you is this: A Soldano amp is an instrument of liberation.

It all began with the first Soldano prototype guitar amplifier, which Mike named Mr. Science. It’s a piece of plywood with a bunch of electronic components stuck on, a longtime experiment in The Quest for Tone, a guitar amp with a life all its own. (Today, Mr. Science is in Mike’s personal collection – complete with tone markings made by Mark Knopfler and Peter Frampton when they were borrowing it while waiting for their amps to be delivered).

Mike didn’t start playing guitar, building guitars, or guitar amplifiers until he was 21. Born and bred in Seattle, young Mike wanted a guitar bad. Mike heard “Badge” and its classic ‘Clapton-at-his-best’ guitar solo and the Quest began. Funny how things come full-circle; now Mike builds Eric’s amps. Mike heard Clapton and Hendrix, and he crossed the line. In his own words, “A whole different way of living.”

Listening to the ‘Badge’ solo one night way back when, Mike said to himself, “Man, that guitar is crying! It’s the coolest thing I’ve ever heard. I‘ve got to play the guitar.” So, his Dad handed him his classical guitar, but Mike couldn’t make it scream or cry.

He put the classical guitar away and pursued his other obsession – building badass cars. Through his teens, Mike terrorized other Seattle street racers with his Camaro. Fine guitars and real fast cars have a lot in common, and Mike has used both this passions to cultivate his high level of craftsmanship, attention to detail, and design superiority.

Looking inside a Soldano amp is like looking under the hood of a Formula One racer. Soldano guitar amplifiers are made in a way that is unfamiliar to most electronics people. Physical components come from the best possible, top-shelf sources, such as aircraft components and hand-made transformers. All assembled in such a way that allows for no compromises and delivers an optimum combination of performance, function, and appearance.

Mike studied Industrial Arts and eventually gravitated towards the Art Department. As a student, Michael cultivated many of the skills that allow him to build great amps. But, one evening when he was around the age of 21, Mike decided to really learn the guitar. Pawnshop guitar in hand, Mike learned quickly. He bought his first amp, a hand-built copy of a classic, tweed 4×10 Fender Bassman. Not only did Mike learn how to play, he learned to fix his amp. Unfortunately, for the aspiring guitarist, it blew up a lot. Fortunately for the rest of us, Mike couldn’t afford to pay anyone to fix it, so he had to learn to do so himself. 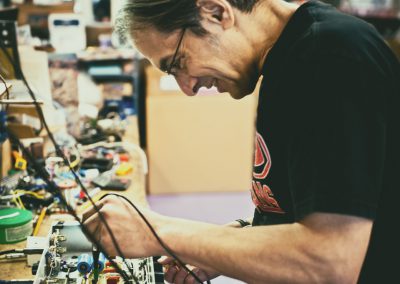 “When you don’t have any money, you can become clever.” Mike built a guitar in one college quarter, earning an “A” in woodshop, and began to develop a reputation around Seattle as a guy who could not only build hot rods, motorcycles, and hydroplanes, but guitars, too. The Quest for Tone began in earnest. This first endeavor into guitar building led to the opening of Mike’s first guitar building shop, way back in ’77. By 1980, Mike was gigging around Seattle and building high-end guitars. But Mike, the guitar player had a sound in mind. One thing lead to another. After souping up a few Fender Bassmans, Mike began to recognize that the Quest for Tone was going to take more effort.

Two years of savings went toward a couple of top of the line amps, but they were still not quite right. Mike’s Quest for Tone continued, and it began to transform into a version of the classic American success story. Mike found himself looking at his three rather “happenin’” guitar amps and thinking, “This still ain’t quite right.” He started looking into what he thought were the shortcomings of “all these amplifiers” and this is where the Soldano magic really began to take shape. He began the Mr. Science project.

The Quest for Tone became tangible – the Holy Grail was the Ultimate Rock Guitar Amp. Mike delved into the technology. He experimented with parallel channels, channel switching, and going for ultimate gain. Prototypes were developed. His friends’ amps were the guinea pigs. “Not happy with the sound of your amp? Don’t worry, I’m a doctor.” Some amps die on the operating table, but not Mr. Science. A Soldano amp, built in collaboration with Doug Roberts, appeared in 1982. Soon after, Mike packed everything up and relocated to San Francisco, where he practiced his craft at the then-famous, but now defunct, Stars Guitars. Many Marshall modifications later, Mike migrated back to Seattle enriched by his San Franciscan experience and armed with a new friend and current partner, Bill Sundt.

Right around 1985 and five years into Mr. Science, guitarists around Seattle started asking Mike two very important questions: “Mike, how do you get that sound? Can you do it for me?” Mike built the first run of Soldano amps in his parents’ basement. Three were completed, but there were parts for more. Only one of the original customers came through and Mike was forced to rough it down to Los Angeles on a wing and a prayer. Appointments with various members of L.A.’s guitar royalty were arranged, but, in Mike’s words, “Everyone flaked!” Innumerable long distance calls, 24 hours behind the wheel, all that effort, and no interest. Frustrated, but not yet despondent, Mike returned once again to Seattle, but this time intent on making the big move to LA. Mike sold his house, put his music career on hold (as in “quit the band”), and quit his day job at the body shop.

Michael Soldano’s first Los Angeles guitar and amp building shop was located in a former bordello. “We used to have guys come by,” he says, “look at the amps and say, ‘Where are the girls?’” Like so many businesses, the first year was tough. His first year in L.A., Mike did anything to survive. The Quest for Tone could very easily be subtitled “A Study in Tenacity.” Howard Leese of Heart bought Soldano Guitar Amp #002, but fret jobs, stereo repairs, and anything else wasn’t quite enough. Mike flew home for Christmas 1987, reluctantly facing bankruptcy and failure.

Mike returned to L.A. ready to pack up and call it quits. One night, returning at 4 a.m. from a job as a roadie for Vixen, he found messages on his phone machine from Velvet Underground and solo great Lou Reed, session ace Mike Landau, and Def Leppard’s Vivian Campbell. By April 1988, the Quest for Tone and tenacity started to pay off. By the summer of 1988, Eric Clapton, Mark Knopfler, and the Scorpions ordered their Soldanos and the company had a six-month backlog of orders. Owned by some of the world’s most prominent guitarists, Soldano amps now grace the most prestigious concert stages and recording studios. 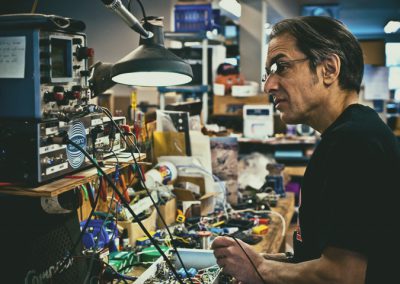 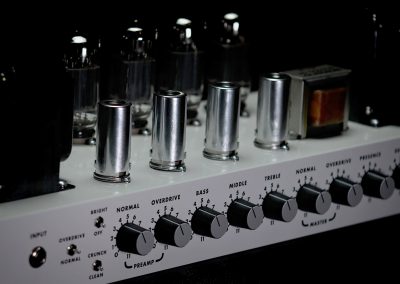